I’ve been telling the Jacob’s version of the traditional story Jack and the Robbers lately. My young audiences really loved the animals’ antics. 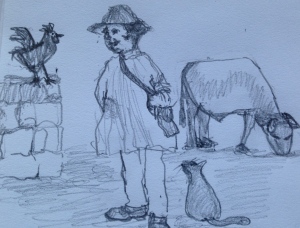 The kids seemed to have no trouble with the notion that Jack has to leave home “to seek his fortune.” For centuries, tales from different cultures have, as the main protagonist, a boy who leaves home to find … riches? a better life?

Of course, I can think of exceptions. In the Scottish tale, The Black Bull of Norraway,  it’s the three daughters who leave their poor home, one by one, to seek their fortune and all end up marrying a wealthy man.

Paraz points out in her … Secret History of the Grimm Fairy Tales. There’s a pattern here too,

“Unlike male protagonists, a female character in a fairy tale sets out into the world not to seek her fortune but rather to accept isolation and poverty and to forgo all hope of stability, which can only be brokered by marriage.” (p. 139)

Does this still ring true today?

I did wonder why the animals all asked to go along… perhaps because they were bored and Jack was so welcoming to each, in turn – “Why of course, the MORE the merrier! and on they went, jiggelty jolt, jiggelty jolt.”

I found myself giving the cat, dog, bull, goat and rooster all different excuses for being free to join Jack in his quest. The cat’s owner had moved away, the dog was old and nobody wanted him, the goat wasn’t leader of the trip anymore, the bull was for the chop, but the rooster? He wasn’t hoarse from crowing … em … his tail feathers had dropped out.

I feel it in my bones that he was hen-pecked. They’d all had enough of his territorial swaggering and chased him off.

Next time I tell this story, I’ll add that he was hen-pecked.

Does it really matter? What do you think? It’s only a story after all.

All photos, drawing and text by Meg

As a storyteller, I do my best to see the story unfold in my imagination as I tell. A well-known American teller, Gioia Timpanelli, once said to me, “If you’re going to tell as story about an eagle, make sure you’ve had a real close look at one.” 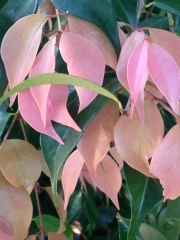 Sunset Mauve Flame, the colour of the Flame Child’s dress in Jospeph Jacob’s ” My Own Self”

Aquamarine, on the edge of the sea, the place the farmer retired to in “J.Percy Cockatoo” by J.Bodger & M.Philp.

Soft Pelican White, where ‘his beak holds more than his belly can.’

Eucalyptus Speckle Bark on the “Galah Tree” where those pesky birds roost  in Jean Chapman’s tall tale of the same title.

Sugar Almond Sundown, the end to a perfect winter’s day. 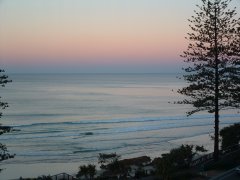 Writing Between the Lines