This week’s Photo Challenge reminded me of a Russian proverb “Everyman loves the tree that gives him shelter.” Last Fall, we had a leisurely walk around Green Lake. People were in the lake, on the lake but mainly, around the lake. 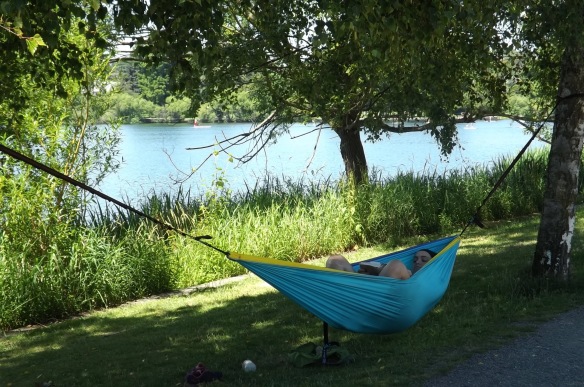 Green shade is a blessed relief in our hot Australian summers. A local family of Boobook Owls have moved to smaller trees which give denser shade, so they can sleep better.

Insects take cover where they can – under this green leaf in New Zealand.  According to friends living in Taranaki, they have had a unusually cool, windy, wet summer.

Mt Taranaki lost its permanent ice cap this month, despite the ‘weather-bomb” at the end of January which brought summer snow to 12000ft.

It’s not so easy to be green in extreme heat. This grasshopper is tough. (That’s a metal rail in full sun)

Ground-nesting birds like plovers, do the best they can. The drought here has made predatory birds more active and so this Plover’s nest was especially vulnerable.

There were four eggs here at first. Butcher birds stole one before this furious photographer chased them off. Of the three which hatched later, only one bird has survived and flies around with the parents.

When there’s not enough rain, it’s not easy being green.

It IS Easy Being Green!

See also Toni’s post for this challenge. She contributes to a blog I follow called Words We Women Write.

This site uses Akismet to reduce spam. Learn how your comment data is processed.