This week’s Photo Challenge is reflecting.  The stainless steel facade of the Len Lye Centre, opened in 2015, does just that. This landmark building, part of the Govett-Brewster Art Gallery in New Plymouth, celebrates Lye’s artistic aim ‘to create an art of motion.’ 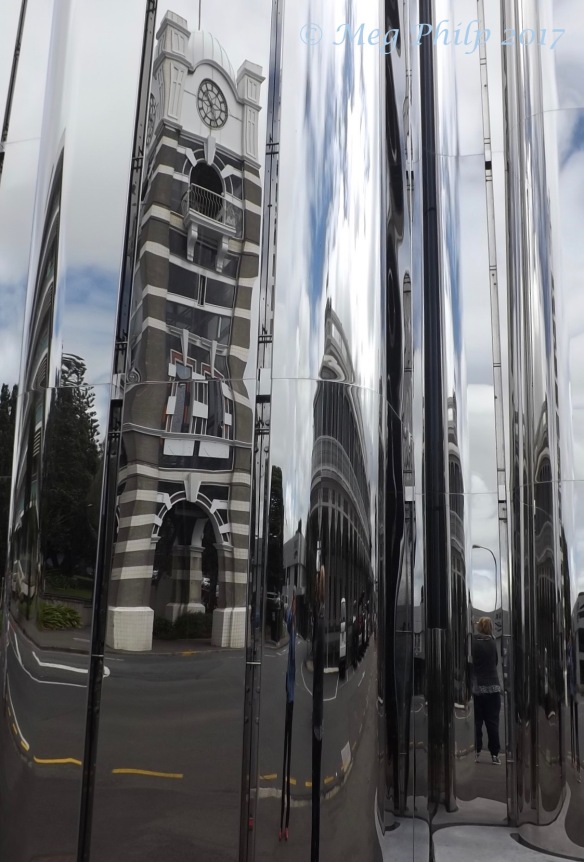 Len Lye was ‘a highly original photographer, poet and theorist.’  He also created kinetic sculptures, paintings and experimental, animated films – all from an unusual angle. He left New Zealand and worked in England, as well as New York. Just before he died, in 1980, bequeathed his works to the people of New Zealand.

In 1941, with his life-long friend, British writer Robert Graves, Lye wrote a wartime manifesto for they were ‘deeply disturbed because they felt the Nazis were winning the propaganda war. Winston Churchill and other leaders were not explaining clearly what the Allies were fighting for.’

This recently discovered, 76 year old, manuscript explains an artist’s perspective of what freedom and democracy really mean, as well as the value of individuality. Now published, it is available for $12NZ from the Govett-Brewster Gallery/ Len Lye Centre shop entitled Individual Happiness Now.

Better ‘get a wriggle on‘ before it’s too late.

All text, except quotes, and photos by Meg.

Musings on Literature & Life From Japan and east asia