Cyclists hate the nesting season here. One speeding past with a magpie in hot pursuit once yelled out to me in passing,” Why do they pick on me?” He was in black and white lycra at the time so the birds probably thought he was a rival. Get too near magpies, or plovers, and they’ll dive bomb you! Kids often learn this the hard way.

Plovers don’t build nests … just scrape the ground and lay their speckled eggs there. They are, however, the most protective of parents.

A pair of Eastern Plovers live locally. I’ve been paying attention to them for a couple of years. Their territory includes a bowling green and a soccer pitch across the road from each other. When I got a better camera, I was able to follow them more closely … they always kept an eye on me.

This green keeper goes out of his way to let the faithful plovers raise their chicks. He doesn’t cut the grass too close, leaves ramps out so the hatched chicks can get out of the sunken green, led under the fence, encouraged across the gravel road, down the slope, under another fence and out onto the large field by their careful parents.

This past year, though, in Nov and June, two sets of chicks didn’t make it past the puffs of grey, fluff stage. Saddened, I blamed nearby cats or butcher birds. Not a sign was left of them. I thought the pair would give up … but was delighted to see this in August.

Walking along the fence line every time,  I finally caught a glimpse of three fluffy chicks, in the early morning. As soon as the adult spotted me, she called them back, under her,  with a clicking sound. I got to know what the different calls meant  like Come back quickly / Move out slowly / Don’t go too far / Hide – danger!

Eventually I was able to stop and photograph them.

A week later, they had moved their home into the middle of  the soccer pitch.

Though, one chick had gone, the parents were never far away. One acted as scout, the other as shepherd. Soon I could get close enough to see how much they’d grown.

They started ranging further afield and seemed to get used to me, this strange bird with a black beak and a green cap.

They roamed together. Now, as big as their parents, the younger birds haven’t got their yellow wattle fully developed. I wanted to get a shot of them flying to finish the story. 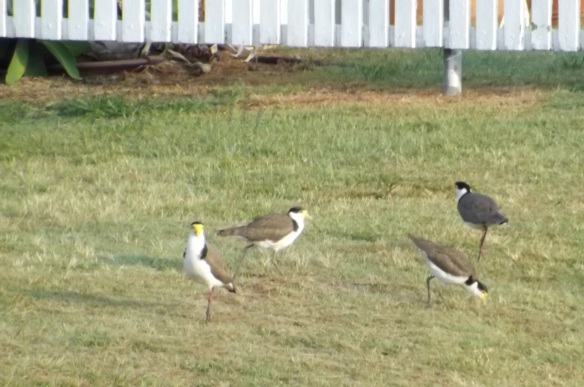 Months later, I’ve been willing them to fly. Several times, they’d wait till I’d given up with my camera, was walking away, and they’d suddenly fly past me, dodging like Spitfires. I noticed that the leader /scout would give three short screeches. (“Fly!”) then the family would follow. Sometimes, they were being dive-bombed by other birds like Magpies (and here, one Noisy Miner bird.)

Three short screeches … and I caught them taking off as a family, following the scout parent. That’s it. They’re on their way. 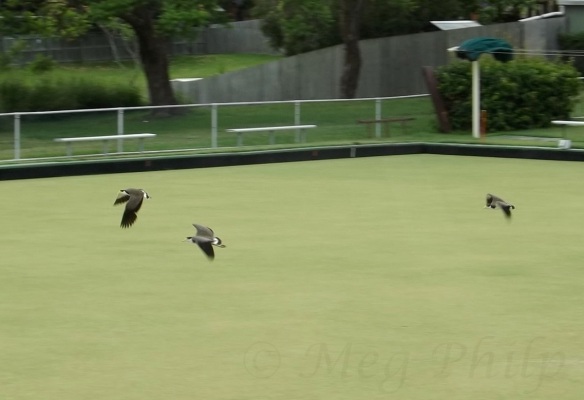 The plover, also know as the Masked Lapwing, has many names in different Aboriginal languages. There’s an ebook called Pitthirrit the Plover for 9 – 11 year olds, available as an app on iPad / iPhone. Produced by the Victorian Aboriginal Corporation for Languages, it’s a traditional story of the Gunitjmara people, the Traditional Owners of southwest Victoria, Australia. Available for $2.99  –  Updated 22 November 2015.

This Australian site is a great help – http://www.birdsinbackyards.net

All text and photos, except where highlighted,  by Meg

Writer and Educator -Dispatches from the Crossroads of Culture, Cookery, & Creativity.