Storytellers work at many levels

1. Be clear on the setting of the tale. (Map out the story, search images or info online.)

2. See the action in your imagination. Dwell on your favourite scene – the one that hooked you in the first place. Can you make it more alive?

3. Clear up any details or facts in the plot you’re not sure of.

4. Include listeners in the story. Ask them a question or wonder aloud yourself. Make them curious about the outcome.

5. Add fun where possible. This is entertainment!

6. Feel the emotions as they occur, as the story carries you along.

Remember that a story told is a give-away, a gift that you hope is passed on.

See if you can find the ways I’ve tried to do this in a story I’m learning to tell.

Here’s my written version of an Xmas story I’ve adapted from a 1992 adaption of The Mice and the Christmas Tree by Pat Thomson in A Stocking Full of Christmas Stories, which is a 1956 adaption of the story in the collection Little Old Mrs Pepperpot, which Alf Proysen expanded on from his carol Musevisa (Mouse Song) he composed in 1946. He was one of  Norway’s most famous writers, poets and playwrights. The song has since become part of their Jul tradition.

Long ago and far away, in a village in the heart of Norway, lived a family of house mice. There was Ma, Pa, Grandma Mouse and seven mousekins, all snug in their home in the pantry wall of an old red house. Each winter the mice celebrated Yuletide just like people did. They got their home ready for Christmas Eve, swept the dust out using their tails, put out good food, got dressed in their best, gave presents and sang around the tree. 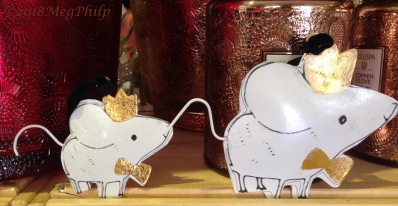 At a nod from Ma, Pa Mouse would roll in an old pine-cone and decorate it with cobwebs. The mouse-children then lined up in order beside their tree and Ma presented each of them with a nut. Then, as a special treat, she went down the line, holding a piece of dark chocolate under each nose, so they each had a good long sniff at heaven.

Next, the mice all caught hold of each other’s tail and circled their tree, dancing and singing all the songs they knew. After that, they played Blind Man’s Bluff until ‘Lights out’ and time for bed.

But one year, the youngest child squeaked into the dark “No! No! We don’t’ want to go!”

“Don’t be silly,” replied both parents. “We’ve all had our Good Jul. Now off you go to sleep, the lot of you!”

The eldest child refused and explained that they all wanted to dance around that really big tree in the front room of the house. Only yesterday he’d seen it through a crack in the skirting board and had told the others how beautiful it looked.

Ma Mouse choked and coughed. She reminded them how dangerous it was to go into those giant rooms.

“Not … if they’re all fast asleep!” stressed the littlest mouse, looking at Pa with shining eyes.

“Oh well, … it is Christmas,” declared Pa looking at  Ma. “Follow me, children!” Off they set. Ma brought up the rear, calling “Mind you go carefully and very quietly.” Grandma decided to stay behind and finish knitting her scarf. 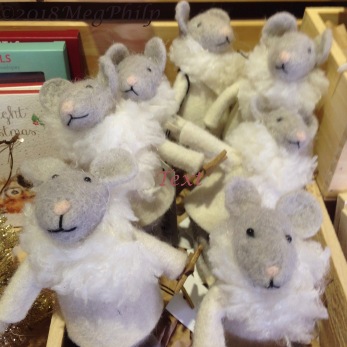 One after the other they quickly crept along, inside the walls of the house till they emerged from the crack in the skirting board. There was the tree reaching to the rafters. “Ooh … aah” they sighed. “Oh, it’s lovely … and so tall! ”

“That’s a Norwegian Spruce for you!” announced Pa. The mischief of mice then skittered by the wall till they sat beneath the wondrous tree. The littlest mouse whimpered to the eldest “But … where are the stars you saw? You said there were lots of sparkling stars all over.”

Meanwhile, Ma Mouse had arrived at last at the opening but couldn’t get through because of her big tummy. She was breathless and grabbed a cord to steady herself. Suddenly, the tree lit up with twinkling stars.

The rest of the family crept around the tree admiring those magic lights, the tinsel; the strings of flags. They even clambered among the pile of boxes underneath. I don’t know who it was found the truck first, but soon all the children were in the back and Pa was in the cab. Imagine their squeals of delight when it started to move and Pa drove them across the room to Ma who pleaded “Children. Not so much noise! Someone will hear!”

They all waved to Ma as the truck went past and then squealed at it veered towards the door, which suddenly clicked open. Each mousekin jumped and clung to their neighbour. As the truck swerved away, a fat brown cat walked in, carrying its tail high.

Pa drove straight back behind the tree. When they came round the other side, there sat the cat on the mat. Pa turned the wheel hard round and drove faster. The wheel stuck there!  Each time the truck came round the tree, the cat made swipes with his paw as it zoomed past. The mice froze with fear in the back.

Oh no! The truck began to slow down! Pa drove in among the boxes. As soon as it came to a stop, he yelled “Everybody out! Up the tree!” Little grey bodies scampered up the trunk and hung on to the highest branches for dear life.

Cat Below pulled at the mat with her claws and squinted up. “Come on down,”she sighed impatiently. “Tonight is not the time for catching.”

“Oh no, we won’t!” shouted the eldest mouse, clinging to a star. “You’ll pounce on us and torment us. We know what cats do.”

“Not tonight!” sighed the cat, looking at her clean claws and then up at these new ornaments. “Christmas Eve is the only time I’m kind to mice!”

The mice froze again as she slowly stretched and got up, walked to the door and called back, “Better watch out … if I see you tomorrow … !” The mice held their breath. Then the door closed and she was gone. 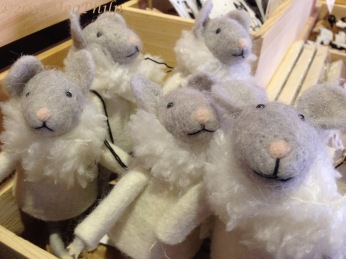 When the family were safely back in their little home, Ma Mouse made all the children promise not to go up to the big house again, to always do as they were told and never to give cheek to the cat. They promised, with their front paws crossed behind their back.

Then one by one, each mousekin took from their pocket, some little strips of tinsel, or a Norwegian flag, wisps of wool, snippets of ribbon and thin silver stars. These they proudly hung on their own cone tree.

And so it was from that night on and ever after, the mice had a fine Yule tree and a  happy story to tell their own children every Merry Christmas. 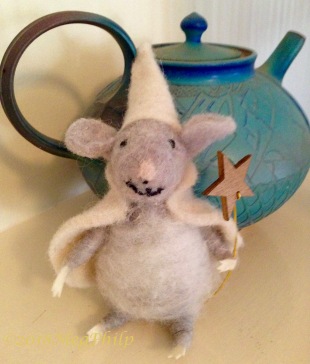 [Dedicated to LC, my Lucky Cat]

All text and photos by Meg. Story Twigs the Imagination! by Meg Philp Copyright © under Australian Law.

‘The Mice & the Christmas Tree’ by Alf Proysen (adapted) in A Stocking Full of Christmas Stories collected by Pat Thomson. London, Transworld, 1993. pp109 -118.

[Pat Thomson has written over 50 books, great to read aloud. Look out for them in libraries]

I learned a lot about mice here! A collection of mice can be a trip, horde or a mischief!

PS. Spot the mistake in one of the photos. Happy Days!

Listeners of any age are drawn into another world by an expressive reader, with a good book. 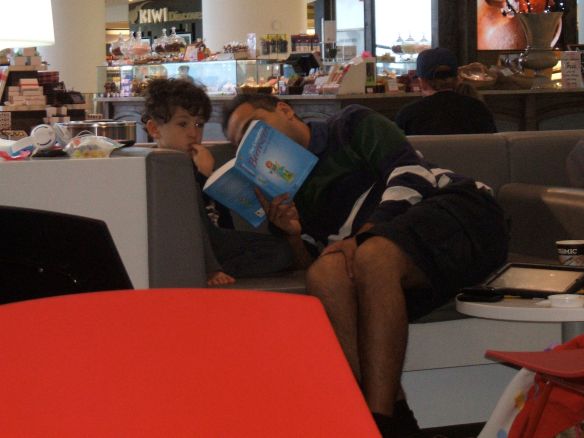 Not everyone is a storyteller. We can, however, read books aloud with feeling. As a human experience, reading loud arouses curiosity and is essentially interactive, pleasure-able, and informative.

Reading aloud fluently puts the life back into words on the page. It’s a step towards oral storytelling, creating a strong bond between reader and listener. 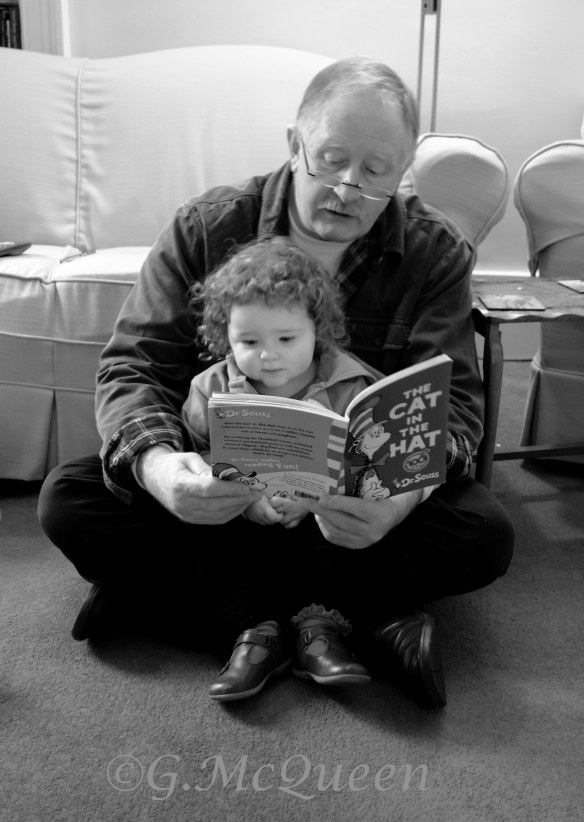 Babies in the womb pick up voice vibrations at 16 weeks. Singing nursery rhymes and reading picture books to the baby from that time on … works! Oracy  – all that spoken interaction – is the vital foundation for literacy. 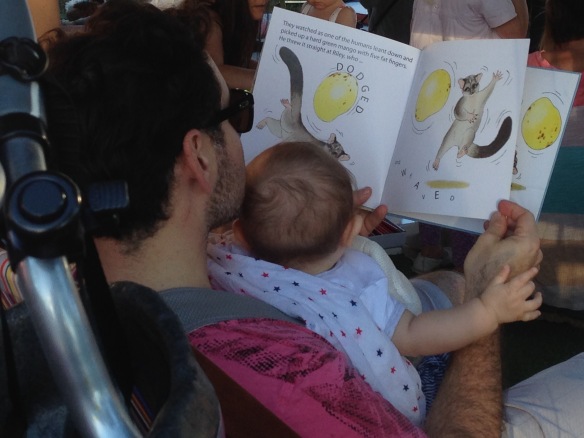 Reading “with expression,” or fluently, is an acquired skill.  We learn by listening to a fluent reader who engages us, using the ‘melody’ (intonation) of their voice. 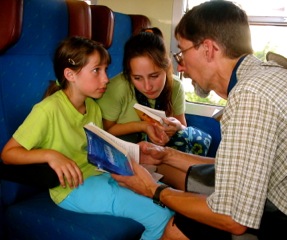 New research into young learners shows that listening to a text read aloud is more instructive than everyday talking – the imagination is stimulated, more parts of the brain “fire” at once, while memory, as well as vocabulary, increases.

As my friend Naomi B. commented so eloquently, listening to stories

“helps them hear the language and its patterns, and eventually it will help them understand the structure and elements of a good story. I believe that growing up hearing stories all the time, every day, helps them recognise and appreciate the stories all around them, and it is much more likely that they will learn and love to create and tell stories of their own.”

See also this week’s inspiring post ‘1-800-Viola Swamp’ in A Teacher’s Reflections by Jennie. Please click the link to learn the power of reading aloud in her Early Years classroom.

All text (except quote) and photos in this post by Meg (except B&W and second last image which are published with permission) are Australian Copyright protected. © 2017 Meg Philp