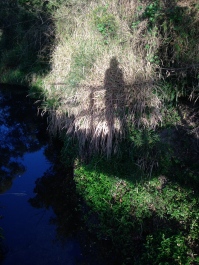 To me, stories have their own beat and music. When I’m learning a traditional story, I like to listen to music from that part of the world. It helps me travel to that place in my imagination, get a feel for the rhythm of the words and sense the flow of the story.

Celtic fiddle music gets me in the mood for Scottish tales. I never really believed that a fiddler would be stolen awa’ to play for the fairies (and be gone for a hundred years) until I heard and saw Alasdair Fraser play his fiddle. He had the audience (me included) up dancing wildly, with him off the stage and in the middle of us all! Talk about carried away! Magic! See the video clip of Alasdair playing on his website. Hull’s Reel starts at about 2:40 http://www.alasdairfraser.com/ 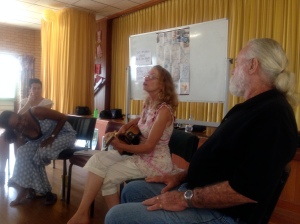 I did a singing workshop last year with Sue Hart, who has often visited and sung with the Baka People of Cameroon. Their vocal music, meant to imitate the sounds of birds in their forest, is mesmerising. Learning to sing in their way, I’m carried off to dusk in the native forests of that part of Africa.

Mark Knophler’s guitar title track for the movie “Local Hero” is very up-lifting. I recall coming in to land at my local aiport, with this being played as ‘muzak’ in the cabin. All I could think of was that I was coming home. I was ecstatic by the time I walked into the terminal!

When I’ve told my version of Parsifal and the Holy Grail, I began by playing an excerpt of The Doors classic “Riders in the Storm” sung by Creed. It’s very atmospheric.

But, to me,  the truest of all sounds comes from old instruments –  as they were played in the times when the old stories were told. In mythology, Cheiron the Centaur sang and played a golden harp. He struck it with a golden key and “sang till his eyes glittered, and filled the cave with light.” (KINGSLEY, Charles. The Heroes)

One afternoon I went along to a local church to hear American harpist Anne Heymann and was transported back through centuries.

She had six harps with her. But the most treasured was a replica an early Irish harp kept in Trinity College, Dublin. It’s strings were made of Australian silver coated, depending on their length, with 9ct to 24 carat gold.

This master harper has a deep knowledge and love of the Celtic harp.

Imagine that you are part of the gathering in King Nuada’s fort in ancient Ireland. Here is part of the story I have told this past year. Lugh is the gifted harper who transports his listeners with his music. These lyrical tales are meant to be accompanied by the harp.

– Excerpt from from The Coming of Lugh From Gods and Fighting Men: The Story of the Tuatha De Danaan and the Fianna of Ireland by Lady Augustus Gregory (1904)

“That is the harp of the Dagda. No one can bring music from that harp but himself. When he plays on it, the four Seasons -pring, Summer, Autumn, and Winter – pass over the earth.”

The harp was given to him.

Lugh played the music of joy, and outside the dun the birds began to sing as though it were morning and wonderful crimson flowers sprang through the grass. Flowers that trembled with delight swayed and touched each other with a delicate faery ringing like silver bells. Inside the dun a subtle sweetness in the laughter filled the hearts of every one: it seemed to them that they had never known such gladness till that night.

Then Lugh played the music of sorrow. The wind moaned outside, and where the grass and flowers had been there was a dark sea of moving waters. The De Danaans within the dun bowed their heads on their hands and wept, like they had never wept for any grief before.

When Lugh played the music of peace, outside there fell silently a strange snow. Flake by flake it settled on the earth and changed to starry dew. Flake by flake, the quiet of the Land of the Silver Fleece settled in the hearts and minds of Nuada and his people: they closed their eyes and slept, each where they sat.

Lugh put the harp from him and stole out of the dun (fort). The snow was still falling outside. It settled on his dark cloak and shone like silver scales; it settled on the thick curls of his hair and shone like jewelled fire; it filled the night about him with white radiance.”

Such is the power of the harp.

Text, except quote, and photos © Meg Philp under Australia Law.